Elon Musk recently posted a series of Tweets pointing out that the ‘New World Order’ control and influence 99.9% of the mainstream media.

The media wars are ramping up. In the aftermath of President Trump announcing his executive order regarding Social Media censorship, billionaire Tesla founder lifted the lid on how mainstream media journalists sugarcoat lies to “get max clicks and earn advertising dollars” for their globalist overlords. Musk was unforgiving towards the media, calling them hypocrites and pointing out that the public no longer trusts them.

Musk says he wants ordinary citizens to ‘wake up’ and realize who really owns the media they are forced to consume.

There seems to be a glitch where tweet to which I replied isn’t showing up, removing context. A journo said polls are meaningless because controlled by “powerful people” & my response was that powerful people also own media. Thus, if you discount polls, you should also discount media. 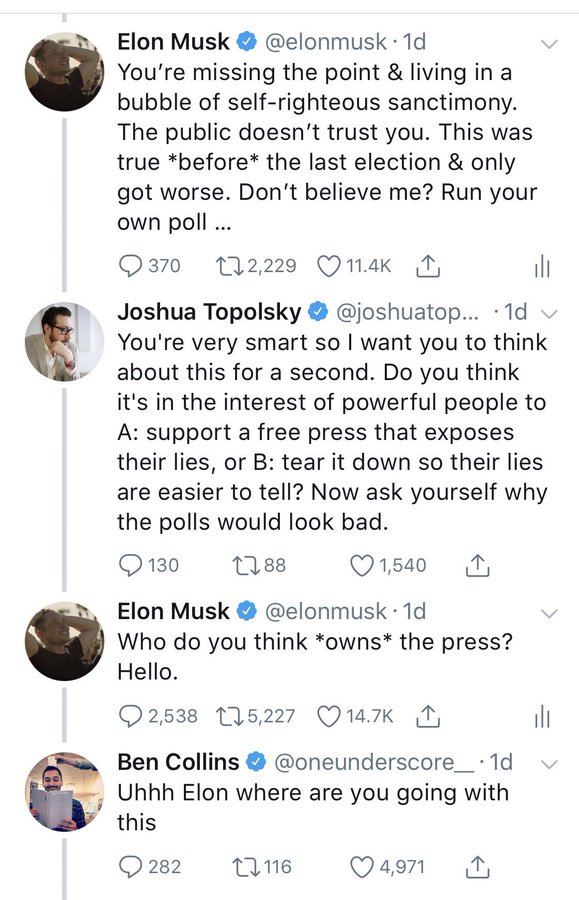 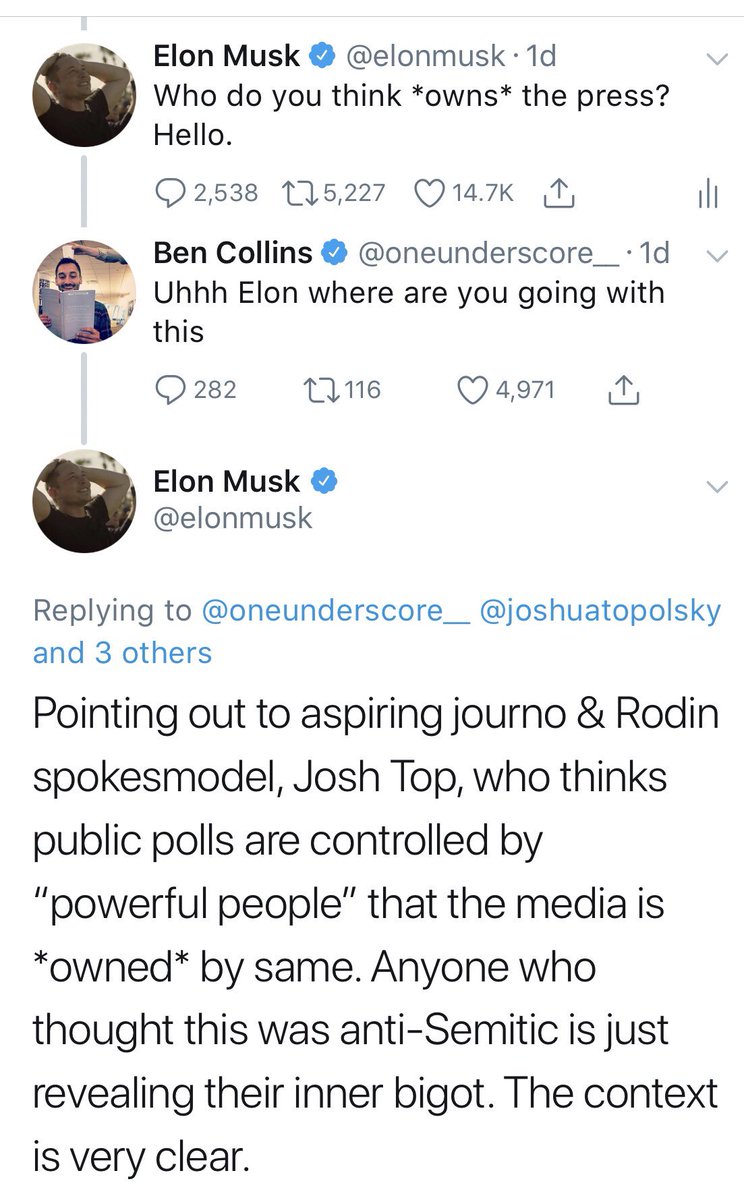 It’s true, Musk doesn’t advertise for Tesla, his electric car company, which means that he contributes no money to the media, who depend on advertising dollars to stay in business.

On the other hand, the traditional auto industry and fossil fuel companies are among the world’s largest advertisers, meaning that they are one of the primary industries keeping the mainstream media in business. When it comes time to cover a story that involves these industries, journalists, and media organizations have an obvious bias and conflict of interest that will influence their coverage of the story even if they were not given explicit orders to create propaganda.

“The holier-than-thou hypocrisy of big media companies who lay claim to the truth, but publish only enough to sugarcoat the lie, is why the public no longer respects them. Problem is journos are under constant pressure to get max clicks & earn advertising dollars or get fired. Tricky situation, as Tesla doesn’t advertise, but fossil fuel companies & gas/diesel car companies are among the world’s biggest advertisers,” Musk said.

One of the dark secrets of the advertising industry is the fact that commercials are not always intended to sell something, but are sometimes an undercover bribe, which corporations use to control the narrative on the sponsored news sources. An obvious example of this is how military arms suppliers like Boeing or Lockheed Martin will advertise on major networks despite the fact that their products are not available for sale to the people watching the advertisements.

It is no coincidence that international stories are covered with a pro-war slant on every major media platform when the arms dealers are advertising on each one—in fact, that is the very reason they advertise. The same goes for recruitment ads for the military, these serve the double purpose of recruiting and also controlling the narrative of the media outlet by becoming their sponsor.

Next, Musk announced that he was planning on creating his own media ranking website that would rate the credibility of journalists by crowdsourcing reviews from readers. He also put up a poll asking his followers if it would be a good idea, or gave the sarcastic option of “no, media are awesome.”

Musk suggested that he would call his site “Pravda,” and while it would seem that these were thoughts coming off the top of his head, one Twitter follower pointed out that one of Musk’s agents “incorporated Pravda Corp in California” in October 2017.

As opposed to centralized fact-checking sites like Snopes or Politifact, which have an obvious bias, a site that allowed the public to decide who they trusted could be an interesting way to rate journalists. Of course, any type of rating system is dependant upon the opinions of the masses, which can sometimes be wrong, and are almost always controversial. However, this seems to be the best model that has been proposed thus far, and it does not seem to favor the mainstream media as other popular “fact-checkers” do. No Trump No Peace

No Trump No Peace
We’re praying for Pres. Trump,
now, much more than ever!
View on Facebook

No Trump No Peace
Why is it, do you think that Kamala Harris dropped out of the Presidential primaries? Could it be because her percentages were so low that there was no way in he!! that she could win her party's nomination?

Harris is an existential threat to America. In her own words, she is okay (watch and listen to the video) with the violent protests that are tearing this nation apart. She doesn't want them to stop!

Do you really want such a radical politician one heartbeat away from being President of the United States of America?

#NoTrumpNoPeace understands that without Trump as our president, along with a conservative majority in the congress, we will be led into continual lawlessness. The Biden/Harris liberal agenda of defunding law enforcement allowing unlimited immigration is a recipe for disaster.

No Trump No Peace
President Donald J Trump doesn’t fit the presidential mold.
That’s why he’s president. We elected him to break the mold!
View on Facebook

No Trump No Peace
When President Trump asked if we’d “get tired of winning,” I don’t think any of us anticipated he’d get three Supreme Court picks in one term and solidify a conservative judiciary for a generation. @realDonaldTrump will go down in history as a great president.
View on Facebook

No Trump No Peace
1.5 million folks died last year just from TB. The world didn’t come to a screeching halt. Why do you suppose that is?

No Trump No Peace
Joe vs Joe.
So sad it’s almost funny. At least it might have been if it wasn’t so illuminatingly true.
+++
https://www.facebook.com/realCharlieKirk/videos/766437657484324/?vh=e&extid=KwihXkPM1LagfOIR
+++

Charlie Kirk
Joe Biden debates a worthy opponent, Himself. Joe has been on every side of every issue. He will be controlled by the Radical Left
View on Facebook

Be sure to share this article if you agree. And remember #NoTrumpNoPeace

Patriots need to become adept at dissecting the news, relying on trusted sources, and using critical thinking skills. It is the hope of AMPAT Media, and NoTrumpNoPeace to become one of your Go-To, Trusted Partners — NTNP
#NoTrumpNoPeace #VoteDemOut2020
Facebook
LinkedIn
Reddit
Twitter
Pinterest
Email
Print

we can do it together

AMPAT Media and #NoTrumpNoPeace is a group of PATRIOTS dedicated to being  outspoken voices for conservative values. Our primary mission is to combat the swamp-monsters,  lies and misinformation of our day.

Some of us choose to remain anonymous. Our concern for anonymity is due to calls for violence by radical members of the government and activist groups such as ANTIFA. No, we don’t fear for our own safety, but don’t wish for our loved ones and folks we care about to be put in harm’s way because of our outspoken political opinions.

The Hashtag #NoTrumpNoPeace is not a call for militancy, but rather, a blunt recognition of our current political atmosphere, where freedom of speech and the exchange of ideas are routinely attacked in the public forum.